Clinics at Malvern and Prahran

Capt. F. is a 72-year-old male Vietnam War Veteran (Australian Army; Captain), who sustained right-sided low back, hip and knee injuries in the course of his military service.

On January 19th, 1969, Capt. F. has deployed from a troop-carrying helicopter into a “hot insertion zone” on a mission while serving in Vietnam. He was carrying his rifle, ammunition and approximately 60 kilograms backpack while jumping from a height of 12 feet from the hovering Helicopter. He and his company were theoretically jumping into a soft field of rice; however, unfortunately, he has landed on a rock. Capt. F. immediately felt pain in his right knee, hip and low back. Two days later he has been medivacked out of the warzone with a dislocated right knee and substantial back pain.

On April 19th, 1969, Capt. F. was medically discharged from the military and in 1971, he began seeing his first Chiropractor, and was diagnosed with compression fractures at the L1 – L3 vertebrae. He began low-force conservative management for his pain. Over the years, Capt. F. has received treatment from several practitioners including other Chiropractors (all low-force Activator style practitioners) and a Physiotherapist (which included exercise rehabilitation and hydrotherapy). In 2000, he began receiving treatment in our rooms using Cox ® Flexion-Distraction therapy. He has remained a patient of ours for the past 20 years.

Further to his medical history, Capt. F has recently been diagnosed with Multiple Sclerosis and had multiple surgeries including a hip replacement and most recently a complete foot reconstruction. To date, he attends weekly appointments in our clinic, continuing to receive Cox ® Flexion-Distraction treatment.

Regular VAS and Oswestry metrics are taken with the patient indicating an average score of 2.5-3/10. Capt. F. describes distal bilateral leg paraesthesia approximately 2-3 times per day as a feeling of “decreased electricity”. This sensation is relieved by lying down for 30 minutes (or more).

Upon initial examination in 2000, Capt. F was a reasonably fit 51-year-old with some distinct symmetry and gait changes. He also demonstrated a mild forward flexed posture, shuffled gait and mild hyperkyphosis of the thoracic spine.

Range of motion examination revealed decreased lumbar and thoracic passive and active movement with more significant spinal restriction on the right side in all three planes of movement.
Paraspinal spinalis and multifidus muscles demonstrated asymmetrical contracture, and percussion evaluation revealed sensitivity over L1-L4 spinal levels.
SLR and Lasague tests were positive on the R side as were Kemps and Trendelenburg’s tests bilaterally.

Initial Neurological evaluation revealed some L3 and L4 nerves root compression on the R side.

Over the last 20 years, Capt. F, under our care, has had numerous plain film x-rays, C.T. scans and MRI scans. Three (3) MRI’s dated from 2004, 2010 and 2019 have been selected to demonstrate chronological comparison of Capt. F’s condition over many years. The following shows the multiple levels of degenerative changes as well as confirm the presence of spinal stenosis 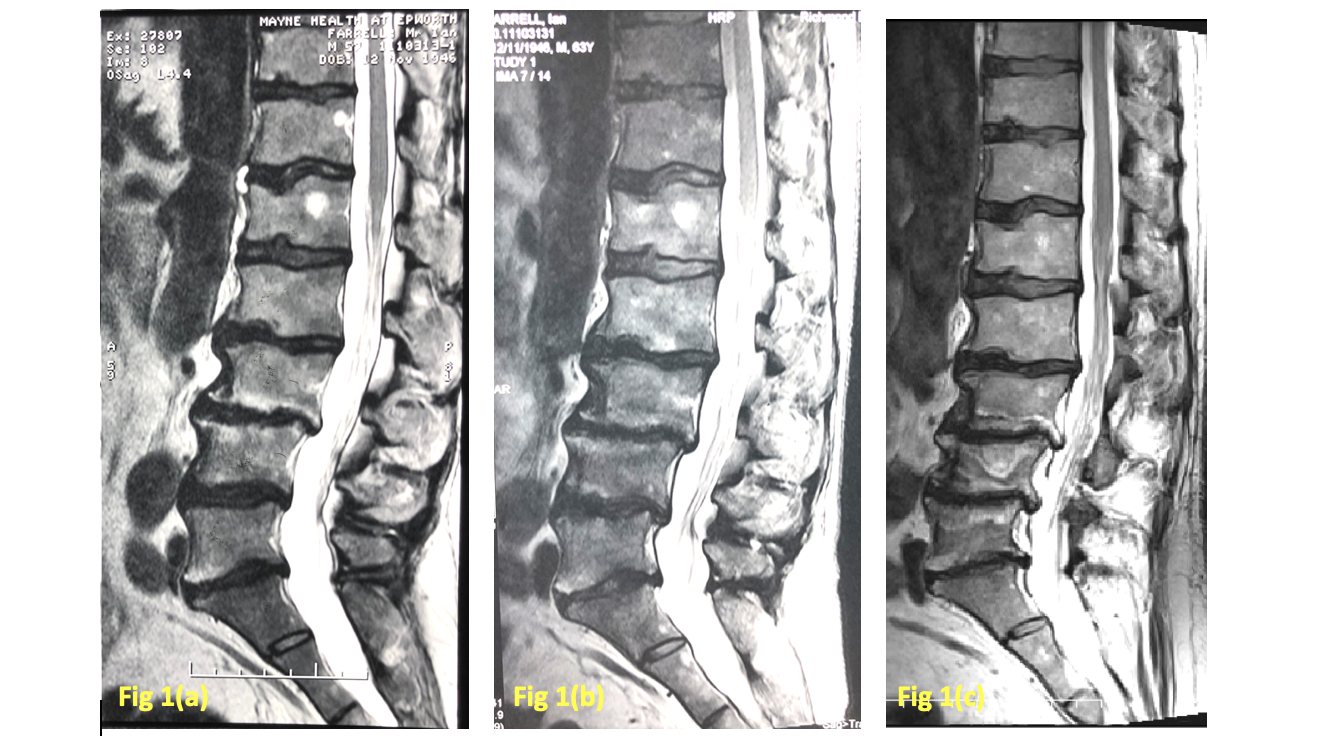 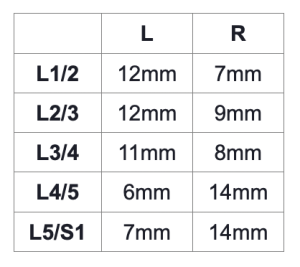 Long term management has been more complex, and he has received Cox® Flexion-Distraction for approximately 20 years.

Capt. F. was informed about the nature of his condition- highly degenerative; with primary goals of managing his pain and discomfort and long term slowing down or retarding further degenerative stenotic change and nerve root compression.

Capt. F openly tells all who will listen that without the spinal Cox® Flexion-Distraction therapy received at the Melbourne Spine Clinic, he would be non-ambulatory and confined to a wheelchair. He is now 71 years old.

This case has been chosen because he is our longest, continually treated patient, receiving Cox F/D, over the last 20 years.

There are an ever-increasing number of case studies and published reports supporting Chiropractic and Flexion-Distraction spinal manipulation being beneficial to spinal stenosis and discogenic spondylosis management.

This case presentation is an excellent example of the role Cox F/D has had in maintaining and retarding a progressive lumbosacral spine degradation following an initial traumatic onset.

Capt. F continues to receive weekly spinal treatment, and his M.S. appears to be benign and dormant at the moment.